Buildings of the Royal Palace

The Royal Palace of Phnom Penh is a good example of classic Khmer architecture found in Cambodia today with its layout of the defensive wall (kampaeng), throne hall (preah tineang), Temple of the Emerald Buddha (Wat Preah Keo Morakot), stupas (chedei), towering spires (prang prasat) and mural paintings. The Royal Palace of Phnom Penh covers an area of 174,870 square metres
The complex is divided by walls into three main compounds, on the north side is the Silver Pagoda and to the south-west is the Khemarin Palace and a central compound containing the Throne Hall. The buildings of the palace were built gradually overtime, and some were dismantled and rebuilt as late as the 1960s. 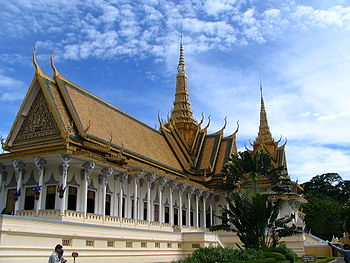 The Khmer name for the Throne Hall is Preah Thineang Dheva Vinnichay meaning the "Sacred Seat of Judgement." The Throne Hall is where the king's confidants, generals and royal officials once carried out their duties. It is still in use today as a place for religious and royal ceremonies (such as coronations and royal weddings) as well as a meeting place for guests of the King. The cross-shaped building is crowned with three spires. The central, 59 meter spire is topped with the white, four-faced head of Brahma. Inside the Throne Hall contains a royal throne and busts of Cambodians kings of the past. 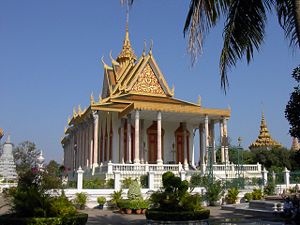 The Silver Pagoda is a compound located on the North side of the palace complex. It features a royal temple officially called Preah Vihear Preah Keo Morakot but is commonly referred to as Wat Preah Keo. Its main building houses many national treasures such as gold and jeweled Buddha statues. Most notable is a small 17th century baccarat crystal Buddha (the "Emerald Buddha" of Cambodia) and a near-life-size, Maitreya Buddha encrusted with 9,584 diamonds dressed in royal regalia commissioned by King Sisowath. During King Sihanouk's pre-Khmer Rouge reign, the Silver Pagoda was inlaid with more than 5,000 silver tiles and some of its outer facade was remodeled with Italian marble.

Khemarin Palace
The Khemarin Palace is the common English name for a building called Prasat Khemarin [Prasat (temple or palace) Khmer + Indra] or in Khmer meaning the "Palace of the Khmer King." It is used a residence by the King of Cambodia. This compound is separated from other buildings by a small wall and is located to the right of the Throne Hall. The main building is topped with a single spired .