A combination of spices, fresh herbs, and curry paste makes for a cuisine of subtlety and nuance that rang from simple to sensational.
If Khmer cuisine could be design by one ingredient that would be one which, at its important pungent, conjure warm images of home cooking and country side family feasts for Cambodians. At the same time, it sets Westerners to wincing.

But there could be no Khmer Cuisine without prahoc, says so chef Sok Chong of Romdeng restaurant, the Khmer restaurant and training school tied to Phnom Penh NGO Mith Samlanh Friend. Prahoc, a fermented fish paste, feature in countless dishes from soup to omelets, some time in conjunction with Kroeung, a lemongrass paste that constitutes the essential ingredient in Khmer cuisine.

At the height of the fishing season, in January to February, people set up shop along the Tonle Sap River, cleaning and drying fish in the sun before putting it in barrels where it left for months to ferment in salt. In the past, farmer flock to the riverbanks exchange rice for their year supply of prahoc .Still common in the 1980s, when Cambodians were slowly emerging from the Khmer Rouge era and little money was circulating in the country, this practice has now disappeared.

In Longteine De Moneiroâ€™s Cambodian upper-class family of 1950s and 60s, as she relates in Khmer cuisine cookbook The Elephant Walk, eating rank Prahoc uncooked was unthinkable. Kenrthao De Monteiro, her very husband Cambodian, a diplomat before 1975, tasted raw prahoc only once and hated it, she says. But unlike Kenthao, and like many other Cambodians, Longeine love prahoc in any sharp or form. As a child, she would hide from her parents and eat papaya or star fruit dipped in the fish past. â€œIt was wonderful,â€ she recalls.

The prahoc used at Khmer food Phnom Penh restaurants such as Romdeng or Malis never fermented on the riverbanks, nor does it exude a strong aroma. Made with fresh fish to the best Cambodian standards, prahoc is all subtle flavor designed to enhance dishes, say chef Luu Meng of Malis, the Khmer cuisine initiative of Phnom Penhâ€™s landmark French restaurant Topaz. For people wanting to experiment with prahoc, Romdeng offers as an appetizer three varieties of fish paste with vegetable dipping. But prahoc is just one of the ingredients that give Khmer cuisine its unique flavor. In fact, says Luu Meng, the simplest dish many incorporate a large number of spices, fresh herbs and curry paste.

A cuisine of subtlety and nuance in which successful marriages of flavors makes all the difference between grand cuisine and daily fare, Khmer cuisine also involves complementing vegetable dish with meat or fish. Eggs, nuts and coconut milk often figure in recipes, with diary products do not appear. The Cambodian habit of going to the market every morning to buy fresh fruit and vegetables, poultry, beef and fish makes for healthy cuisine made from scratch daily.

Like the country itself, Khmer cuisine may have incorporated foreign influences- among the curries from Indian and nodule from China- but it has colored them with its own brand of ingredients and flavors. For example, Khmer curry is incorporate sweet potatoes used for starch rather than potatoes, which are instead used in some Asian countries, and the Khmer visionâ€™s redness comes from local mkack seeds instead of chill sauce.

The origins of many Cambodian dishes and their rituals faded away over the centuries, especially during Khmer Rouge regime that erased so much ancestral knowledge. Today some dishes live only live on in the memory of a few older people. â€œTo build Romdengâ€™s menu of provincial dishes, says Chef Chong, â€œWe talked to grandmothers, old teachers and family members, and ask them about food before the war.â€ Thatâ€™s how the restaurant team rediscovered the recipe for Siem Reap provinceâ€™s fish broth with water spinach and spicy basil, which has probably not been made for decades.

According to Nusa Thaitawat, author of Cuisine of Cambodia, household recipes of Cambodia household recipes of the Royal family were preserved due to the publication of The Cambodia Cookbook, written by Princess Kanitha Norodom Rasmi Sobhana, aunt of retired-king Norodom Sihanouk, and published by the American Womanâ€™s Club in the 1960s. In addition, during the retired King exile in China and North Korea in 1980s, he and another aunt, Princess Kith Kanya, experimented in the kitchen and published their recipes in the retired Kingâ€™s Monthly Bulletin, writes an Nusara, who conclude her cook book and with King Sihanoukâ€™s recipe banana, peanut butter  and caramel cakes.

Despite the turmoil of the 1970s, some traditions have endured. Num Korm and Nom an-sam are still served at wedding for example. These two deserts respectively symbolize manhood and womanhood. According legend, writer Nusara, they were served by a deity to the first couple on earth after the deluge to the prompt intimacy and inspire them to populate the planet.

Although traditional flavors must be preserved, says Malisâ€™ Chef Meng, at the times the dishes benefit from to day modern cooking techniques and equipment. For instance, he makes ample use of fresh stocks, and marinates Sihanoukville scallops before backing them with flower sauce. Some Phnom Penh restaurants stay away from monosodium glutamate (MSG) even though itâ€™s commonly used in Khmer cooking. This type of chemical salt was originally made from vegetables such as cabbage, although Cambodian now tends to buy commercial MSG, says Meng. Cambodians have long known how to put to good use all the nature provides. Malis authentic version of chicken salad contains banana blossoms; Romdengâ€™s grilled sun-dried comes with mango and watermelon; and Khmer Surinâ€™s scarab appetizer is made with coconut milk. Romdeng has even added to its menu a regional delicacy rarely seen in Phnom Penh: crispy tarantulas from Skun Village to Kompong Cham Province. Serve with lime and Piper sauces at the restaurant, they are more photographed than eaten, says Chong. But for the adventurous palate, they are certainly word tasting.
(By Michelle Vachon)
Khmer Surin
Add: No. 9 Street 57 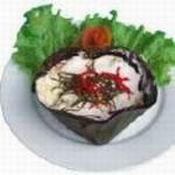