Islam is the religion of a majority of the Cham (also called Khmer Islam) and Malay minorities in Cambodia.
According to Po Dharma, there were 150,000 to 200,000 Muslims in Cambodia as late as 1975. Persecution under the Khmer Rouge eroded their numbers, however, and by the late 1980s they probably had not regained their former strength.

All of the Cham Muslims are Sunnis of the Shafi'i school. Po Dharma divides the Muslim Cham in Cambodia into a traditionalist branch and an orthodox branch. 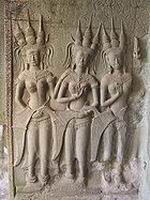