Apsaras relief from Angkor Wat, Cambodia
Cambodia was first influenced by Hinduism during the beginning of the Funan kingdom. Hinduism was one of the Khmer Empire's official religions. 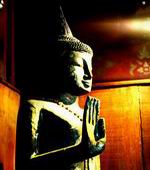