The majority of Cambodians, even those who are not ethnic Khmer, speak Khmer, the official language of the country.
The Cambodian language, Khmer, is part of the Mon-Khmer family and has its origins in Sanskrit and Pali. It is spoken all over the country except in some tribal areas where local indigenous languages are used. In larger towns and cities English is spoken by an increasing number of educated people. French is spoken by some of the older members of society and Chinese by many of the business people. All facilities catering to tourists employ English-speaking staff who more often than not speak several other local and international languages including German, Thai, Vietnamese, Japanese and even Russian.

Ethnic Khmer living in Thailand, in Cambodia, and in Laos speak dialects of Khmer that are more or less intelligible to Khmer speakers from Cambodia. Minority languages include Cambodiaese, Cham, several dialects of Chinese, and the languages of the various hill tribes. Khmer, in contrast to Cambodiaese, Thai, Lao, and Chinese, is nontonal. Native Khmer words may be composed of one or two syllables. Khmer has a rich system of affixes, including infixes, for derivation. Generally speaking, Khmer has nouns, verbs, adverbs, and various kinds of words called particles.

These latter borrowings have been in the realm of material culture, especially the names for items of modern Western technology. The language has symbols for thirty-three consonants, twenty-four dependent vowels, twelve independent vowels, and several diacritics. 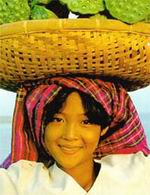